Last night I wrote for the first time since September 2012. That’s eight months of no writing. I was afraid I was going to hit a year. What writing I did back in September felt like pulling teeth, and I gave up until the feeling to write would come back.

I tried to continue blogging, thinking writing non-fiction was better than not writing at all. But as you can tell by my pathetic archive, that only lasted a couple more months. 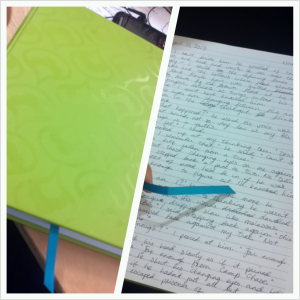 Last night I took the advice of a commenter and watched Shakespeare in Love for the first time. I was watching The Boy’s dogs while he met with his dance partner, having just gorged myself on homemade Chinese hot pot. The movie ended. I stared at my writing journal on my abandoned desk, which I had moved to my living room in the desperate attempt to remind myself to write.

That bright green cover with the bright blue ribbon filled with lined, unwritten pages no longer seemed so scary. I grabbed a pen and put it to paper. I wrote three pages, enough to be a decent first draft of a first chapter.

I don’t know if it’s still The Rebel’s Touch anymore. It’s not set in southern Ohio on the banks of the Ohio River. It’s in Columbus, my home city, on the banks of the Scioto. The main character has just discovered a dirty, emaciated man who just told her something that makes her think he escaped from Camp Chase, the Ohio prison for Confederates. Other than that, Abraham Lincoln has just died.

That’s really all I know. But it’s enough.

This is an excellent way to go into the weekend! The first review of my short story, Miss Preston's Predicament, is in. I'm so grateful this reader enjoyed it.
Happy Thursday. How are you?
Do you have things you rely on to trick your brain into solving problems?
Do you ever feel this way? "She believed she could... but she was tired." 🤣
Thank you to the readers who kicked off their October with some new short fiction 🥳 Every copy means a lot, having written this story during my maternity leave and after a four-year dry spell. If you got a print copy, the cover is so soft; it's perfect to cuddle with under a cozy blanket as the morning fog rolls away. Also, this is what sales reports look like when you grab the first available writing utensil 🤣
How do you feel about ghost stories under the fantasy category?? This came in the mail today, just in time to announce I'm participating in the #FindFantasyFriends challenge hosted by @authorbrittanywang. I write sweet historical fantasies where the magic system is tied to the ghost world. Well, I have one novel, one short story, and I'm working on another novel... very slowly. I'm seeking other historical fantasy writers to read, so this should be a fun challenge. Check my stories each day; I'll share not only my posts, but also the posts of other historical fantasy writers. This book was really hard to find, by the way!
Met with a couple friends that I haven't seen together since March 2020 to celebrate the launch of my short story. Delicious food and drinks were had, sooo many giggles, and a walk around the park. I felt a little of the burn out melt away for today at least. Much thanks to my husband, who minded the kids and didn't call or text me once while I was out, because he knew how much I needed the break.
Hey #nanowrimo and #preptober friends, I made a new writer's journal for pantsers that includes spreads to help you outline, but without actually outlining, like character sheets, location lists and floor plans, inspiring authors, book covers, and similar titles, etc. New to this variation, I've included 31 daily writing spreads that help you keep writing goals, track word counts, and a daily reflection so you know where you want to pick up the next day. The daily spreads have a perpetual calendar at the top, so even if you don't write every day, you can still make use of a 31-day writing challenge. Now available in my Etsy shop, which has a 15% off sale running right now. Link in my profile.
They're here! My new reader journals are up on Etsy. Scroll through to see the intro, index, and example book review pages. Each journal holds reviews for 44 books, and I designed the covers to complement or match the fiction planner journals. This way, you can create a gift set for your friends participating in #nanowrimo or #preptober
I love the way creamer swirls when poured into coffee and tea. What small joy have you experienced today?
The other day I was feeling tired, frustrated, overwhelmed, and seeking instant gratification while doing something creative. So I took video of how I make a loose leaf tea latte. And now I want another one, because that was an excellent cup of tea.
Trying to find the mind space to work on A Spirited Engagement but it's been a hectic summer. Recently I've been focusing on reading and listening to writing podcasts to keep a part of my brain engaged, but honestly, most of my mind space is dedicated to work. My boss left and I'm helping onboard my new boss. An employee left and I absorbed one of their projects and delegated the other one. We're still fully remote which is good because there isn't space for our baby in the daycare. The news is persistently devastating and frustrating. This is a season where I want to market my short story launching October 1, but honestly, I'm thinking of releasing early and giving myself a break. I truly hope people enjoy the book, and I want to continue the series, especially since I have three dreamed up. Does anyone else lose their drive when they plan out a number of creative projects? Maybe it's just my exhaustion talking. If you're feeling emotionally and creatively tapped, you're not alone. Today I took a floating holiday to make this a 4-day Labor Day weekend in the hopes that some sort of recharge will happen as I sit with the baby while watching Dad play with the toddler. My hope for you, for all of us, is that we find space to recharge this weekend.