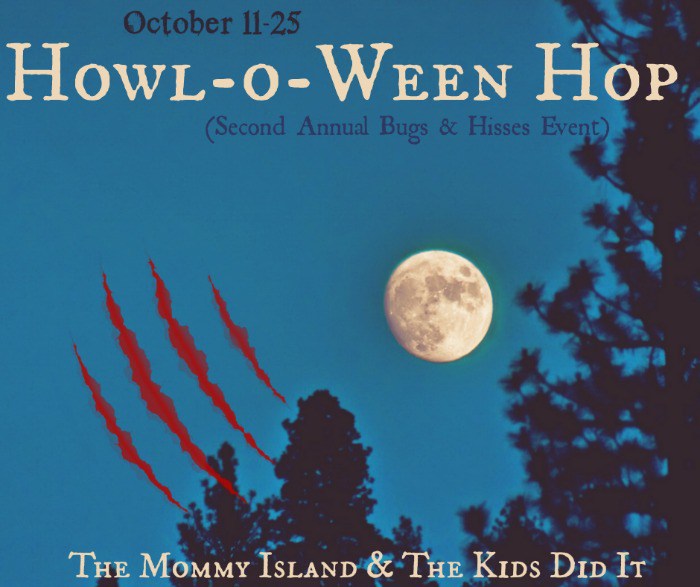 This year, I’m giving away digital copies of Haunting Miss Trentwood and The Last April! Keeping it simple this year, you can tweet a message, visit my Facebook page, or post a comment below to win copies of my popular eBooks.

Thanks to The Kids Did It and The Mommy Island blogs for hosting this giveaway hop! If you’ve never done one of these, I’m part of a bunch of bloggers who all signed up to give away prizes. At the end of this post is the full list of bloggers giving away prizes.

I’m always looking for bloggers to review, so if you do happen to win, I’d love to see your thoughts on your blog, Amazon, or Barnes and Noble!

Quick reminder that today is the last day you can download a free copy of my latest book, THE LAST APRIL! Even if you’re not interested in reading it right now, please take advantage of this offer. Your download will push this book further up in the ranks. The first week of a book’s life is critical for success! 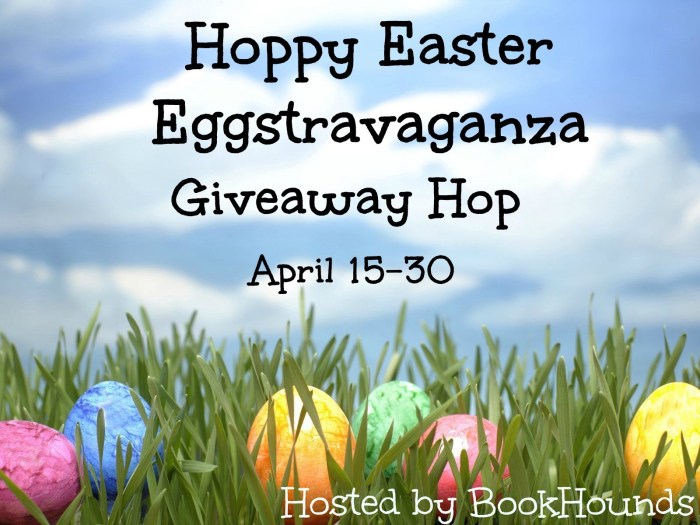 Happy official launch day for THE LAST APRIL! I’m so excited to share this book with friends, family, and co-workers at my Columbus book launch party on April 15th. For those of you unable to attend in person to enter the event raffle and potentially win a copy of the book, continue reading.

To win a free book box complete with a signed print copy of THE LAST APRIL, please enter using the Rafflecopter below on April 15th – 30th. Not sure you want to enter this giveaway?

Here is the back cover blurb:

Spontaneous, fifteen-year-old Gretchen vows to help heal the nation from the recently ended Civil War. On the morning of President Lincoln’s death, Gretchen finds an amnesiac Confederate in her garden and believes this is her chance for civic goodwill.

But reconciliation is not as simple as Gretchen assumed. When her mother returns from the market with news that a Confederate murdered the president, Gretchen wonders if she caught the killer. Tensions between her aunt and mother rise as Gretchen nurses her Confederate prisoner, revealing secrets from their past that make Gretchen question everything she knows about loyalty, honor, and trust.

The Last April is an entertaining, thoughtful novella of Ohio after the Civil War, meant to encourage readers to reflect on themes of fear and hope in uncertain political times.

If you want another chance to win a print copy, you may also enter the Goodreads Giveaway for THE LAST APRIL. 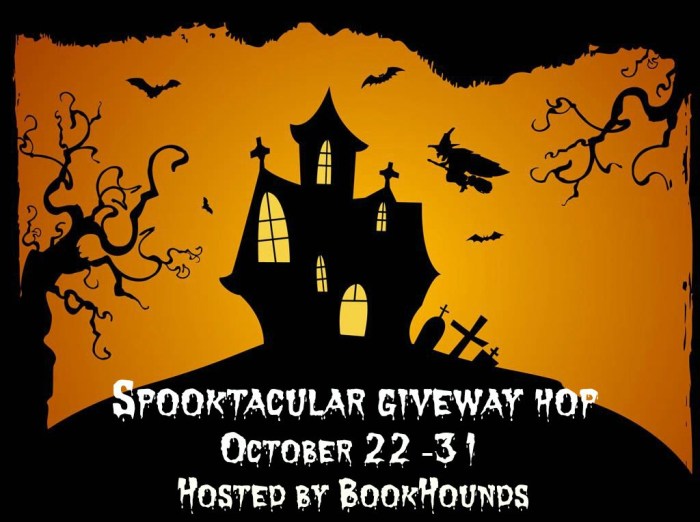 This time last year, I had been married a month. As such, I forgot it was Haunting Miss Trentwood’s five year publication anniversary! Sad face. This year, I contacted a local cover designer for my belated celebration of this book making its way into the world. Next month, I’ll talk about how the process went with a new cover designer.

Three lucky winners will win book boxes that include free print copies of the gorgeous new cover as part of my participation in the Spooktacular giveaway blog hop. The Spooktacular blog hop is a great opportunity to win prizes by hopping between author / reader blogs and entering their contests. 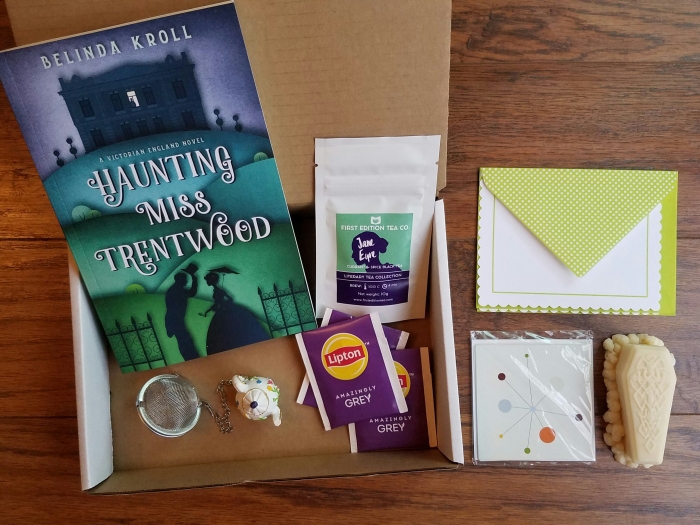 To win a free book box complete with a signed print copy of the newly redesigned Haunting Miss Trentwood, please enter using the Rafflecopter below. Not sure you want to enter this giveaway?

Here is the newly updated back cover blurb:

Witty, secluded Mary is reeling after her father, Trentwood, passes away and returns in ghostly form. Despite the ghost’s constant prodding, Mary lives in their aging English countryside manor house with only her aunt and their servants for company.

But their quiet home carries secrets even from Mary and Trentwood. When Hartwell, a London lawyer, arrives at their doorstep claiming someone is blackmailing his sister, Mary stumbles into a mystery that forces her to revisit memories and rethink her future.

As Mary and Hartwell seek the blackmailer, each learns about the importance of opening one’s heart to trust and betrayal. Haunting Miss Trentwood is a light gothic tale (think Legend of Sleepy Hollow meets Casper the Friendly Ghost) written from varied perspectives. Readers will be entertained by bright dialogue and encouraged to reflect on the universal themes of dealing with parents and disappointing relationships, and learning to love again. 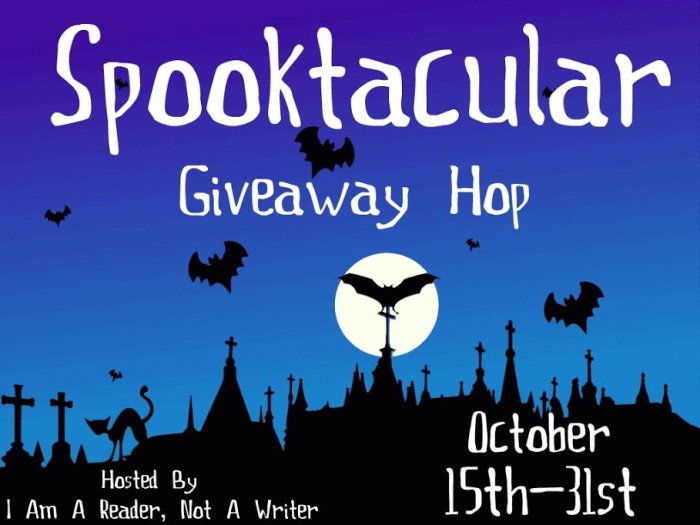 Welcome everyone, and happy Halloween season! This year we’re participating in the Spooktacular giveaway blog hop, where you can win prizes by hopping between author / reader blogs and entering their contests.

To enter to win a free print copy of Haunting Miss Trentwood, the eBook version, and a copy of the eChapter “The Seance,” please enter using the Rafflecopter below. Not sure you want to enter this giveaway? Read the first chapter of my gothic comedy via the Booktrack sample embedded in this post!

Jump to the other blogs for a chance to win more prizes!

It’s October! Wouldn’t it be fun to troll the internet for ghostly loved ones doing their best by the people they left behind, whether they are children, lovers, and the like? I think so. Only because that was the theme for Haunting Miss Trentwood, and there were a lot of influences for that book.

This week I’m talking about my favorite movie version of Hamlet, starring David Tennant of Doctor Who delicious nerd-boy amazingness. 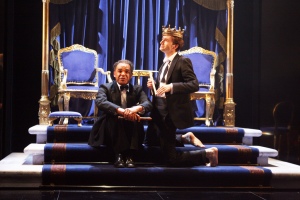 ( If you click the image in  this post it will take you directly to the PBS online video showing the entire performance. )

William Shakespeare‘s Hamlet follows the young prince Hamlet home to Denmark to attend his father’s funeral. Hamlet is shocked to find his mother already remarried to his Uncle Claudius, the dead king’s brother. And Hamlet is even more surprised when his father’s ghost appears and declares that he was murdered. Exact dates are unknown, but scholars agree that Shakespeare published Hamlet between 1601 and 1603. Many believe that Hamlet is the best of Shakespeare’s work, and the perfect play.

Why you need to watch this movie

So why do I love this version? Mainly because I feel like Tennant does a fantastic job of making me feel like Hamlet has kind of really lost his mind after seeing his father’s ghost. He starts out quiet and rather boring, actually, especially for those of us who obsess about Tennant after his stint on Doctor Who. I mean, really. He says the lines well enough, but without enthusiasm. Without personality.

Manic David Tennant at his finest, spouting Shakespeare like milk from a bottle, jumping around the stage, exclaiming, pulling at his hair, driving everybody nuts and yet being so adorable at the same time. It’s his interpretation of Hamlet that is different yet similar to his interpretation of The Doctor… so much energy, too difficult to contain, no way to direct it, so desperate for resolution.

Watch it and let me know your thoughts. There are so many versions of Hamlet out there… do you have a favorite?

By the way, the newly released behind-the-scenes chapter called The Seance from Haunting Miss Trentwood is free on Kindle Oct 29 – 31. It’s a pretty funny chapter that lets us see a bit of the time between when Mary sees her father crawl from his grave and when Hartwell arrives at her front door looking for a blackmailer. She hires someone to perform a seance and send her father back to heaven, and the results are… well, you have to read it.

And! The love-story-not-love-story Mad Maxine is also free! A story about a woman who never thought she would fall in love, and when she does, what happens when illness mars the relationship. Same dates. Enjoy!

Please leave reviews, it would be so appreciated.

Apartment Therapy wrote this great blog post about home organization using the Berenstain Bears, which inspired me to write a similar post, but about writing. First off, the Berenstain Bears was a favorite of mine. I loved that the little sister got to do everything the little brother did, and listening to my mother read about the spooky old tree. Let’s take a look at the eight things Apartment Therapy mentioned and see how they apply to writing.

That is what I learned from the Berenstain Bears. Do you have any children’s books that inspire you to think again about your writing and publishing process?

P.S. Don’t forget about the Belinda’s Birthday Giveaway! 27 free ebooks and audio books as prizes to celebrate my 27th birthday. Not interested? That’s all right, we here at Worderella would appreciate you spreading the word for us. Deadline is midnight on my birthday, August 10.