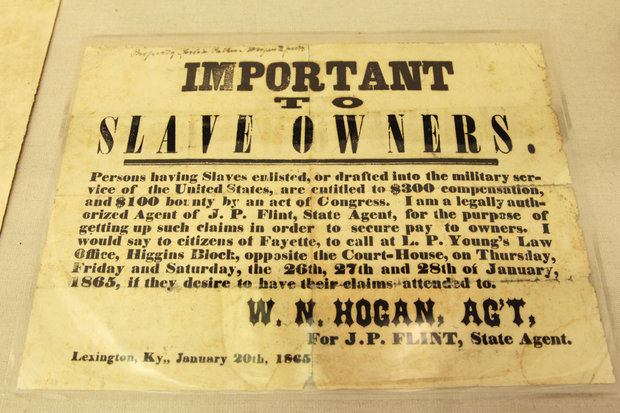 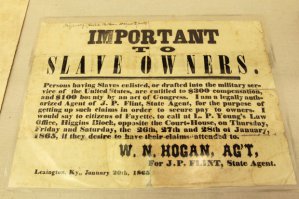 When you’re in school in the States, it’s really easy to make it seem as though the Civil War was Yankees vs Rebels, North vs South, Unionists vs Confederates, Abolitionists vs Slaveholders. As if Yankee = North = Unionist = Abolitionist and Rebel = South = Confederate = Slaveholder. Without question.

It’s only after doing a (very little) bit of digging that I’ve realized this is not the case at all. You could be a slaveholding Unionist, i.e. supporting the federal Union that made the USA government. You could be a Confederate abolitionist, i.e. someone who supported state rights but disagreed with slavery. And on and on. It’s a fascinating mess.

Anyway, The New York Times is continuing its great series about the Civil War, chronicling the four years on its 150th anniversary. Today it’s a great article about Kentucky during the Civil War, this time about a staunch Unionist family who also happened to be slaveholders.

Though the Underwoods, like Kentucky, stayed loyal, their staunch Unionism made them outsiders at home. Josie’s father campaigned across the state for peace, leading to charges that he was under the sway of “Lovejoy and the abolitionists” and thus not a “consistent Southerner.” Crowds of secessionists shouted “hurrah for Jeff Davis” at trains passing through town on the L and N. “Every man on that train will think Bowling Green is Rebel — when she’s Union,” Josie lamented, “though the Union sentiment is much the greatest in Kentucky, the Rebels have so many rowdies they make the most noise.”

Make sure you read the entire article. It is certainly eye-opening and great material for The Rebel’s Touch, since Tempest is a slaveholding Unionist.

Honestly, the more I read about the Civil War, even though I’m focusing on one year around the Ohio River at Ripley and across the river in Kentucky… I keep learning so much. It is a real struggle to know what to include in the book and what to keep out. Which real people to I add as supporting characters, and why? How does it support the story of a man trying to regain his memory during a tumultuous time in history? My brain hurts just thinking about it. Goodness, why do I have to make everything so difficult…

Spent nap time today organizing my scene list in @notionhq and transcribing scenes from my writing journal into the word file. Did I mention that not only am I working on a historical fantasy novella, but I started a short story that brings back some friends from "Haunting Miss Trentwood?" Probably not, since I just realized they'd be making a cameo myself yesterday!
Thought I'd do an intro post since I've had a number of new Insta follows over the last couple months!
Happy Lunar New Year! This is the year of the ox, which is also my year. My friend's book celebrating the year of Chinese holidays is 25% off for a limited time. Don't miss your opportunity for this beautifully written and illustrated book!
First lines Friday from THE LAST APRIL: "Everyone else would remember that Saturday as the day President Lincoln died. Gretchen Miller would remember it as the day the ragged man collapsed at her feet."
New journals, who dis? I'm loving how composition books (7x10 in) and field books (5x8 in) now have fancy covers. I want my journals to be less precious i.e. using a composition books to scratch out my ideas, but also something attractive that entices me to write, therefore the cute covers. When I have more time in the future I'll likely make my own composition book covers to save money (though these weren't expensive by any means). I'm starting a new process where I put planning content in the smaller journal, and the larger journal is for discovery writing and world-building. I'm waiting for a traveler's notebook cover from Etsy to help keep the current project together. Pretty excited about it.
Volume on for a little ASMR delight. This is the first week of my personal February challenge to write three sentences a day. I got the idea from watching an interview with @maryrobinettekowal, who mentioned this technique to keep writing during upheaval. I also stole the idea to change pen colors so I can tell the days apart, but for the life of me I can't remember who had the idea first so I can't credit them. I never thought I'd be into podcasts, but it turns out writing podcasts are totally my jam and the perfect thing to listen to during midnight newborn feedings so I have ideas percolating by the time I try to write during the day.
We're week two into being a mom of two under two (by a month or so), while also trying to brainstorm my first historical fantasy (still). This is a snapshot of where my brain is right now... We have dinosaurs and kiddo drinks, journals and reading for me, and other newborn detrious off screen. I realized yesterday while multitasking by listening to the Writing Excuses podcast and nursing simultaneously that this book is going to be really hard for me to write because I've pantsed my previous books. I don't usually outline and tighten up until the second draft. The act of outlining should make it easier for me, but since I can't decide how defined I want my magic system to be, how impactful it is on society and regulations, it's making it hard to plot or even know what this book is about. Every time I outline, I feel like I'm rehashing what I've read before... Plus throw in sleep deprivation, general recovery, and the ongoing pandemic and it's a wonder that I'm going to try to commit to writing three sentences a day, just to see what happens. I've rewritten the beginning at least six times... I think I just need to move on and see where this thing takes me.
Great post from @ohiohistory:
Whatever your politics, today history is being made and we are all witness to it. Wearing my hair Edwardian style and some pearls in honor of the suffragettes and Madam Vice President-elect today.
Today on MLK Jr day, I'm reflecting on multiple things, activism being one of the topics. There are many ways to be an activist (swipe right to see a couple), but as a novelist, I've always felt what I contribute to fiction can't help but be a form of activism because my intended audience is the young adult reader. This latest #wip has an opportunity that I don't want to mess up, but I also gotta get through the first draft! I've mentioned using @notionhq as a way to write digitally, but part of my process is to read straight through the pieces and parts, filling in the narrative gaps. Since the Notion app doesn't allow for concatenation (yet), I printed everything out and used my @levenger #discbound hole punch to make this fun packet. I can move sections around at will, just as if this were a single file. Commence narrative gap filling!
Who loved American Girl dolls but couldn't justify the expense growing up? Who is still an avid history fan and just realized Amazon has its own line of 18" dolls that are less than half the price, and thanks to Etsy you can dress them in a specific decade if you want? Pictured is the Sienna model of the Adora Amazing Girls line, and the 1870s bustle gown I purchased from Love from Lola on Etsy. I bought the doll that most looks like the character in my new gaslamp fantasy, and the dress reflects the era. I can't decide if I'm going to style her hair or leave it because it's adorable as it is. We'll see. I'm also considering commissioning a dress using Nigerian fabric, just to be extra fun.
Y'all the @target dollar spot is killing it with productivity accessories. I bought these while waiting for my new @personalplanner to arrive next month and I've already used them for work. #bujojunkies #bujolovers #bujoaddicts