I envy my own characters even though they live in my head and therefore, are technically me anyway. Why the envy? They have distinctive penmanship and can wield a fountain pen with a flourish. I silently wail against the loss of the importance of penmanship in the real world, and especially the loss of my own penmanship, due to the efficiency of computers and e-mail, and the rising cost of snail mail. Or rather, I wail against the fact that I had no real patience to excel at penmanship in the first place. I could blame this on the now-now-now of today’s culture, but I won’t. I love to get mail, so I should write more of it, which should encourage more people to send me mail in the first place.

Sometimes I think that the historical fiction part of me is entirely at odds with the computer scientist part. For instance, despite my obsession with efficiency, I would love to write in a scrawling hand that visibly defines my personality. I want to take the time to create evidence of my handwriting that, years later, my children and grandchildren can gawk over and infer that I was a determined woman given to fanciful thoughts… or something sentimental like that.

So I decided the other day to buy a fountain pen set and train myself to write the way my characters do. I did some research about fountain pens and found that today, if you want a nice fountain pen, it will cost you at least fifty American dollars. And that technology has advanced the pen so that you can actually buy them in a disposable format, the way you would buy a Pilot rollerball pen. (I, of course, bought the disposable kind. And I love them!)

However, I couldn’t stop there with the modern fountain pen; I had to go back to first fountain pen thanks to my thirst for irrelevant knowledge. Sadly, there is a discrepancy between how old the fountain pen is. Some claim the oldest known was created by a Frenchman in 1702, whereas other resources say Egyptian caliphs commissioned the first one in the 10th Century, and still others say there were experimentations as early as the 1st Century. 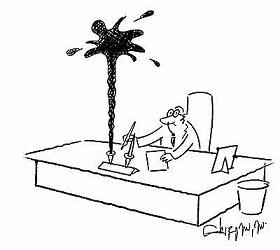 The fountain pen that we know today, where a capillary feed regulates the ink flow, was first patented in 1884 by Lewis Waterman. He invented this capillary feed after his new, extravagant pen leaked all over an important contract that he subsequently lost to a competing broker. Funny how desperation and irritation are the true mothers of invention.

Today, there are multiple ways for filling the ink cartridge of a fountain pen. There is the traditional way of filling it with an eyedropper, and then there are button, lever, coin, and click mechanisms which alter the internal pressure of the pen, allowing it to “suck up” the ink. In the 1950s, pre-filled replaceable cartridges became all the rage because they were easy to insert and cheap to buy…but the invention of the ballpoint pen overshadowed the improvement and I don’t think the fountain pen has gotten over the shock yet.

Even though modern fountain pens are expensive compared to ballpoint pens, there is still a valid use for them in the pen market. For instance, many arthritis/carpal tunnel sufferers feel it’s easier to write with a fountain pen because of the effortless ink flow and large diameter of the pen (to allow for cartridge size). There is a larger variety of colors in comparison to the ballpoint pen. And then there’s the snob factor: There’s something classic, regal, and elegant about writing with a fountain pen. People respect a person who writes with a fountain pen because it’s assumed to be a harder instrument to write with.

…Or maybe that’s just what I like to think people are thinking about me when they see me writing with my fountain pens.

8 thoughts on “Relating to my Characters: Penmanship and Fountain Pens”